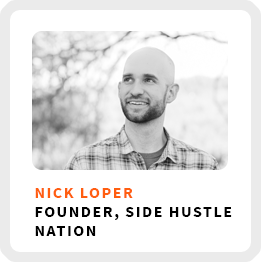 Are you curious about starting a side hustle? Nick Loper is the founder of Side Hustle Nation and host of the podcast of the same name that covers all the why’s, how’s and what’s of starting a side business.

He’ll share his three C’s for building a side hustle: creation, connection, and contribution.

Some of the side hustle business models he touches on in our conversation include Google AdWords, affiliate marketing, selling services on Fiverr, and selling stuff on Craigslist. 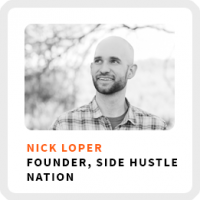 Nick’s first side hustle was a shoe comparison website called ShoeSniper that eventually enabled him to leave his full-time job at the Ford Motor Company.

Since then he has published half a dozen books, written 1500 blog posts, and interviewed 200+ people on side hustles. He knows his stuff, so listen up even if you are moderately curious about starting a side gig. It’s a great first step as you make your transition to self-employment.

How Nick Works and Thinks

“If you have a gig that takes up the majority of your time, you have to adopt the mindset that it’s your  largest client, not a job.”

If you’re trying to find the time to start a side hustle, here’s Nick’s advice:

1) Track how you spend your time using a spreadsheet or an app like Toggl.